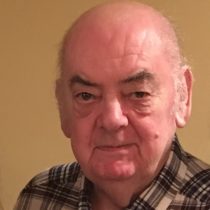 William E. Archambault, 88, a retired horologist (tower clock specialist), of  Holliston, passed away Friday, February 14, 2020, at his home after a long illness. He was the son of the late Florence (Vadeboncoeur) and Edward L. Archambault.  He was the husband of 65 years to Bertha M. (Drury) Archambault of Holliston.

Mr. Archambault was born in Nashua, NH and raised in Waltham. He was a 1949 graduate of Waltham High School and a 1953 graduate of Boston University School of Management. A Veteran of the Korean War, William served with the Eighth United States Army in Yokahama, Japan.  Immediately following his military service, he worked for Raytheon Company in Waltham. He then worked as production manager for an industrial advertising agency in Boston. William retired in 1995 after 25 years as the owner of Tower Clock Specialists in Holliston.

Visitation will be held on Thursday, February 20th from 4:00-7:00 p.m. at the Chesmore Funeral Home of Holliston, 854 Washington St. www.ChesmoreFuneralHome.com A funeral mass will be celebrated on Friday, February 21st at 11:00 a.m. at St. Mary’s Church of Holliston. Burial will follow in the parish cemetery. In lieu of flowers, donations may be made to a charity of one’s choice.