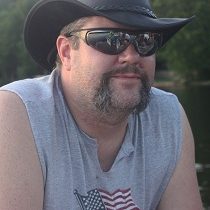 Hopkinton-
Todd Eric Vogel, 43, of Hopkinton, passed away Monday, April 9, 2012. Born
in Riverside, NJ, he was the son of Carol (Todd) and Charles Vogel of
Medway.

From an early age Todd was skilled at mechanics and working with his hands. He started off with model cars and worked his way up to lawn mower engines and dirt bikes. He attended high school at Tri-County Regional Vocational Technical School in Franklin where he trained to be an electrician. By the time he finished high school he was working on cars and trucks and had developed a love of off- roading and mud bog racing. He was a member of the Greater Franklin Off Road Club for many years.
He spent many of his early summers on Lake Winnipesaukee in NH where his family owned a cottage. There he spent his vacation time outdoors fishing, hiking, camping, and boating.An all around good guy, Todd worked as an electrician for many years and eventually established his own company. He moved to his lakeside home in Hopkinton where he could spend his time outdoors doing the things that he loved, like snowmobiling, jet skiing, boating, and riding his Harley motorcycle. He loved hunting and was an avid WWII collector. He was recently married to Lori Levangie of Milford.

Besides his parents, he is survived by his brothers, Timothy of Medway and Terry and his girlfriend Kerry of Hopkinton. He is also survived by his grandmothers Elizabeth Vogel of Ocala, FL and Emily Todd of Milford, MA. He also leaves behind his aunts and uncles Ken Vogel of St. Pete’s Beach, FL, Pat and Al Reinertsen of Mansfield Ctr, CT, Polly Todd of Egg Harbor, NJ, Harvey and Janet Manchester of Smyrna, DEL, Larry and Barbara Todd of Framingham, and David and Linda Todd of Greenville, NY. . He also leaves behind his cousins, second cousins, his great Aunt Florence, his great Uncle Tom, many wonderful friends and neighbors on the North Pond, and his cat Diesel.
He will be deeply missed by his daughters Kelsey and Samantha Rutkowski, his granddaughter Jayden, and his long time friend Kim Bailey all of Hopedale.

The family of Todd Vogel wants to thank the community for their condolences and thoughts during this very sad time. At this time the family has chosen to cancel all pre-planned events on April 29th and will be planning something private.