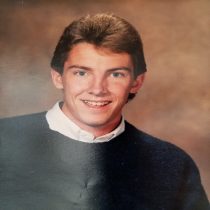 Scott C. Martineau passed away on January 22, 2017, in Hopkinton, Massachusetts after a long struggle with Wilson’s Disease that caused copper poisoning in his liver, brain and other organs. He is survived by his parents, James P. and Arlene (Dunne) Martineau of Fort Mill, SC, sister Elizabeth Martineau Bascio, her husband James Bascio, niece Jessica Bascio, and nephews Jared and Jonah Bascio of Rock Hill, SC. He is also survived by several aunts, uncles and cousins (especially Christine Dunne who always gave him extra support and encouragement).

Everyone who knew Scott always commented on his constant acts of kindness towards them, his sense of humor, and the overwhelming courage that he exhibited as he persevered through his pain and disabilities.
Scott graduated from Holliston High School in Massachusetts, and graduated with high honors in economics and communication from the University of Miami. Scott wrote for the school paper and tutored many athletes while at Miami. Scott worked for Invesco as a quantitative analyst for several years until his disease caused him to change directions. Scott then wrote articles for many sports magazines and collaborated with writers for several television shows and series, including Heartland and Dawson’s Creek.

He will also be missed by his many friends including Brett Parades, Adam Fagiano, James Shanahan, Eddie Daniels, Jeff Falvey, Dan Shea, Kenny and Mandy Phillips. Scott fought courageously until the end. Words cannot express the pain and loss his family is experiencing as they say their final good-bye to Scott.

Visitation will be held on Saturday, February 4th from 9-10:15 a.m. at the Chesmore Funeral Home, 57 Hayden Rowe St. Hopkinton, MA www.ChesmoreFuneralHome.com. Come celebrate his life at a Requiem Mass at St. Matthew Parish, 105 Southville Road, Southborough, MA, on Saturday, February 4, 2017, at 11 AM. Scott will be buried at St. Mary’s in Holliston, MA. In lieu of flowers, the family asks that donations be made in Scott’s name to the Wilson Disease Association, 5572 N Diversey Blvd, Milwaukee, WI 53217 www.wilsonsdisease.org, or a charity of their choice.