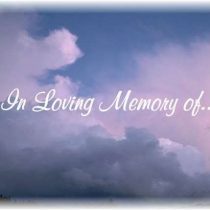 Private services are being held with family

Ruth Marie Carr, 81, of Holliston, passed away Tuesday, December 6, 2016 at Genesis Healthcare in Milford. Born in Boston, she was the daughter of the late Dorothy (Paige) and Armand Millette. She was the wife of the late Theodore W. Carr who passed away in 2011.

Ruth was one of eight children. She loved arts and crafts, baking, and bingo. She is survived by her children, Sandy Crowe and her husband Doug of Holliston, Suzette Carr of Holliston, Ted Carr Jr. and his wife Amy of Leicester, Kevin Carr and his wife Jennifer of Bellingham, and Craig Carr and his wife Fran of Port Charlotte, FL. She also leaves behind seventeen grandchildren, and nine great-grandchildren, and was a good friend to her daughter-in-law of 26 years, Chris Carr. She is predeceased by her beloved grandson, Jeremiah Carr.

Services will be held privately with family. Arrangements are under the care of the Chesmore Funeral Home of Holliston, www.ChesmoreFuneralHome.com