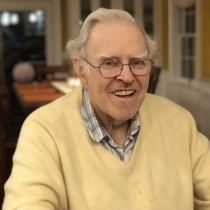 Ray G. Yarashus, 77, of Hopkinton and Holliston, passed away peacefully at home on Tuesday, April 10, 2018, due to congestive heart failure and kidney failure he experienced as complications of diabetes . Born in St. Clair, PA, he was the son of the late Ida V. (Razonsky) and Albert J. Yarashus.

Ray was a star athlete who went to college on a full athletic scholarship for football at George Washington University.  Ray worked his way through college by working 3 part-time jobs at the same time, including one for the U.S. Post Office, where his route included the White House and Executive Offices in the early 1960’s.  He was a life-long supporter of the Kennedy family and treasured his meeting with President John F. Kennedy and Attorney General Robert F. Kennedy and their wives. After college, Ray decided to pursue a master’s in education, marry and become a physical education teacher.  Eventually, he started a real estate company in Maryland and worked his way up to owning and managing some of the best real estate offices in Maryland.  He retired and moved up to Massachusetts, which he quickly grew to love.