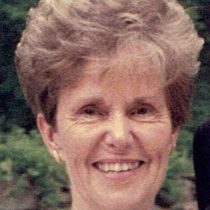 Private Graveside Service to be held at Oakwood Cemetery in Troy, New York

Phyllis Uline Palitsch, 90, a longtime resident of Hopkinton, died peacefully at home with her husband, John A. “Jack” Palitsch, by her side.  He survives her, following 71 loving years of marriage. Born in Troy, New York, Phyllis was the daughter of the late Donald and Elizabeth Uline.

She is the mother of the late Donna Lynn, and is survived by her son John R. Palitsch of Vernon, Connecticut, and daughter Suzanne Palitsch Barnes and husband, Jeffery, of Hopkinton, Massachusetts. She is also survived by her grandchildren, Kate Palitsch Czaplinski and her husband, Jeffery; Jason F. Palitsch; Jacqueline P. Barnes; and Elizabeth M. Barnes; and her great-grandson, Roy James Czaplinski.  She is also survived by her sister, Marilyn U. Hasbrouck and husband Douglas, and many loving nieces and nephews.  Phyllis was also a sister of the late Betty U. Engineri and Virginia U. Knippel.

During World War II, Phyllis was a member of the Civil Air Patrol of Troy, trained as an aircraft identity spotter. She graduated from Troy High School, where she and Jack met. Phyllis worked for R.T Bower CPA Accounting, and then became Superintendent of United Memorial Methodist Church in Sycaway. Phyllis eventually became an officer in the family business, Otto’s Auto Parts, as well as inventory control manager.  She was also secretary and treasurer of another family business, J&L Enterprise Real Estate.  Phyllis was an avid swimmer; she achieved her certified swimming instructor’s license and taught swimming for 30 years at the Troy YWCA, and served as a Camp Fire Waterfront volunteer swim instructor.

After moving to Hopkinton, Phyllis was heavily involved supporting the Hopkinton Senior Center and Friends of the Hopkinton Library. Phyllis was best known for knitting Christmas stockings and sweaters, baking amazing pies and wonderful holiday cookies and feasts for the extended family, especially the summer clam steam, and never ending pool parties and barbeques with family and friends.

There will be no calling hours.  A private graveside service will be held at Oakwood Cemetery in Troy. In lieu of flowers, memorial donations can be made in honor of Phyllis to the Hopkinton Senior Center, 28 Mayhew Street, Hopkinton, MA 01748. Arrangements are under the care of the Chesmore Funeral Home of Hopkinton. www.ChesmoreFuneralHome.com.