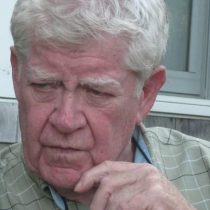 Paul was a 1955 graduate of St. Mary’s High School in Milford. He went on to receive his Bachelor’s Degree from Boston College and a Masters from Boston State College. He then spent the majority of his career teaching for the Lincoln Sudbury school system in both Noyes Elementary School and Curtis Middle School. He was also a musician and directed many school musicals during his tenure in Sudbury. Paul served in the National Guard. He enjoyed playing golf, gardening, cooking, and spending time down the Cape. He was also a dedicated Boston Sports Fan.

He is survived by his three children, Paul Hurd Jr and his wife Shay of North Conway, Tricia Kennedy and her husband Michael of Franklin, and Christopher Hurd of Holliston. He also leaves behind his brother, Peter Hurd and his wife Mireya of Miami, FL; 6 grandchildren, Paul, Cameron, Cassandra, Catherine, Caroline, and Ryder; and many nieces and nephews.

A graveside service will be held at 11:00a.m. on Monday, December 5th at St. Mary’s Cemetery in Holliston. A mass in Paul’s memory will be said on Sunday, February 12th at 9:30a.m. at St. Mary’s Church of Holliston. In lieu of flowers, donations may be made to Friends of the Cape Cod National Seashore, P.O. Box 550 Wellfleet, MA 02667 or www.fccns.org Arrangements are under the care of the Chesmore Funeral Home of Holliston, www.ChesmoreFuneralHome.com