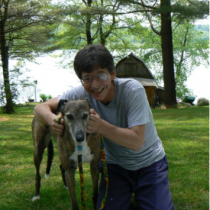 John Lombardo, 62, of East Taunton, MA and formerly Holliston, died August 11, 2017 after a courageous battle with cancer. John is survived by his loving wife, Jo-Anne Sites Lombardo, his mother, Anita of Franklin, and his siblings, Massimo of Northbridge, Robert of Whitinsville, Frank of Lunenburg, and Rosemarie of Pittsburg, CA and their spouses, Joyce, Denise, and Dale, along with nieces, nephews, and a great-niece.

John was born in Morlupo (Rome) Italy in 1955 and immigrated with is parents Alfio and Anita and his brother Massimo to the United States in 1962. John graduated from Holliston High School in 1974. John and his wife Jo-Anne were married on 9/16/1989 and made their home in East Taunton. He was an avid card player and enjoyed numerous trips to Las Vegas with his wife and friends. John also had a passion for gardening and his adopted greyhounds.

Visitation will be held on Tuesday, August 15th from 4-7p.m. at the Chesmore Funeral Home of Holliston, 854 Washington St. (Rt. 16). A funeral mass will be celebrated on Wednesday, August 16th at 11:00a.m. at St. Mary’s Church of Holliston. Burial will follow in Lake Grove Cemetery in Holliston. In lieu of flowers, donations may be made to Dana Farber Cancer Inst. Memorial Contributions,  P.O. Box 849168, Boston, MA 02884.