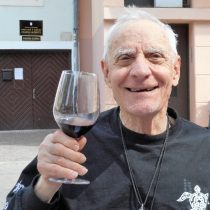 Memorial celebration to be held at a later date

John Gentiluomo, 82, of Holliston, passed away peacefully on Sunday, November 13, 2016. Born in Schenectady, New York, he was the son of the late Mary Lena (DiMartino) and Antonino Gentiluomo, and beloved husband of 54-years to Barbara (Engelke) Gentiluomo.

John was the son of hard-working Italian immigrant parents, and first in his family to attend college while also serving in the US Army.  After obtaining a Bachelors degree in Electrical Engineering from Union College, John and Barbara moved to the suburbs of Philadelphia to start a family, and also begin what would be a 30-year career with Western Union.  Soon thereafter, they relocated to Holliston, MA in 1970.

As an acknowledged, real-life tinkerer/engineer, John could literally fix anything, including toys, cars, plumbing, electrical wiring, furniture restoration and clocks. He and Barbara enjoyed running a successful antique business, breeding Cairn Terriers, and traveling the world together.

John will also forever be remembered as “Dad” – a fantastic father and role model to his children.  He always had kind words of encouragement, loads of smiles and a wondrous sense of adventure.  He had a life-long passion for fishing and sailing, and loved to spend family vacations camping in the great outdoors. Most of all, he enjoyed spending time with his children, encouraging their success, and seeing all of their “firsts.”

The family is grateful for the love and care given at Newton Wellesley Center for Alzheimer Care.  A visitation with friends and family will take place on Wednesday, November 16th from 4:00-7:00p.m. at Chesmore Funeral Home of Holliston,  854 Washington St. with a brief service to be held at 6:00 PM. A memorial service for John will be held at a later date.  In lieu of flowers, donations may be made to Mass General Hospital Memory Care Unit, 100 Cambridge St. Suite 2000, Boston, MA 02114