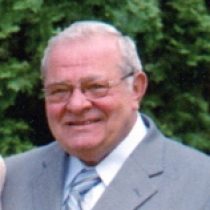 Frank Louis Mascis, 76, of Holliston, passed away Thursday, October 17, 2013 at the Metrowest Medical Center in Framingham. Born in Boston, he was the son of the late Philip and Angelina (Donatelli) Mascis. He was the husband of the late Emilie (Pothier) Mascis who passed in 2012.

An Air Force Veteran, Frank was a prominent business owner who owned Corion Corp. in Holliston. He was an accomplished pianist who loved to cook. He enjoyed his constant companion, his cat, Rosalie.

Visitation will take place on Sunday, October 20th from 4-7p.m. at the Chesmore Funeral Home of Holliston, 854 Washington St. www.ChesmoreFuneralHome.com A funeral home service will be held at 11:00a.m. on Monday, October 21st. Burial will follow in Lake Grove Cemetery. In lieu of flowers, donations may be made to DAV Memorial Program P.O. Box 14301 Cincinnati, OH 45250