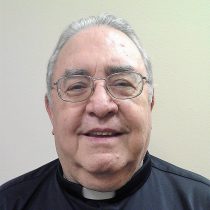 On Wednesday, November 18, 2020, shortly after 9:00 pm, Fr. Aniello Salicone died at Ascension Hospital in Franklin, Wisconsin. He was hospitalized since November 14 with symptoms of Covid-19. He was 80 years old, having been born in 1940, in Ariano di Olevano sul Tusciano, Salerno, Italy.

He joined the Xaverian Missionaries at the age of 21. In 1962, he made his first religious profession. He made his perpetual vows in 1965 and received priestly ordination in 1966. In 1967 he was sent to Salerno, first as a vocation director and then as vice rector. After a year of language in London, he left for Sierra Leone. He worked in Kabala, as assistant parish priest, teacher, and then as parish priest. In 1980, P. Aniello received a Master’s Degree in Divinity at the Catholic Theological Union in Chicago, and from 1981 to 1989 he was a teacher in the major seminary of Gbanga, Liberia. He returned to Italy for treatment, and from 1990 to 1993 he was rector of the house in Finchley, London. Finally, in 1994, he was assigned to the U.S.A. He worked at the Animation Center in Holliston, Massachusetts, St. Therese Chinese Catholic Church, in Chicago, Illinois, and finally he was assigned to Franklin, Wisconsin, where he continued with ministry.

We are grateful for his work, and for the many hearts he touched. May the Lord bless you and Keep you! May the Lord’s face shine upon you, and be gracious to you! May the Lord look upon you kindly and give you peace! We thank you all for your continued prayers.

Interment will be held at Xaverian Cemetery at Our Lady of Fatima Shrine in Holliston.

If you wish to express your sympathies to the Xaverian family, please send them to the Xaverian House of Franklin.
Xaverian Missionaries 4500 W Xavier Dr Franklin, WI 53132