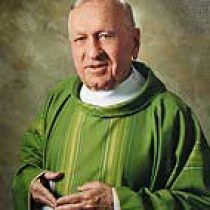 Father William Haley, 83, of Boston, MA and formerly of Holliston, passed
away Sat., May 14, 2011 at the Regina Cleri Residence in Boston. Born in
Boston, he was the son of the late Mary (Corkery) and Edward Haley.

Ordained for 59 years, Father Haley, a graduate of Boston College High
School, St. Clements Hall, and then to St. John’s Seminary. He was
ordained by Cardinal Cushing on January 10, 1952. His first parish
assignment was at Our Lady of Mt. Carmel in Waterbury, Connecticut, then
to St. Ambrose in Dorchester, Massachusetts. He enlisted in the United States Air Force as a chaplain and retired as a lieutenant colonel. When leaving the service, he became associate pastor at St. Catherine’s in Norwood and remained
there until his appointment to St. Mary’s Church in Holliston for 30
years.

One of nine children, he is survived by 1 sister; Marie Doherty of Hull
and her children Mary Beth Tulio and her husband Ralph of Cohasset, and
James Doherty and his wife Carol of Long Island, NY along with numerous
other nieces, nephews, great nieces and nephews. He is predeceased by 7
brothers; Edward, Joseph, Francis, Walter, Thomas, Robert and Paul.

Visitation will be Monday, May 16, 2011 from 4-8 pm in saint Mary’s Church
of Holliston. Additional visitation will be on Tuesday from 2-4 at Regina
Cleri Residence in Boston. A Funeral mass will be celebrated on
Wednesday, May 18, 2011 at 11:00 am in Saint Mary’s Church in Holliston
followed by burial in the parish cemetery. Arrangements are from the
Chesmore Funeral Home of Holliston, www.ChesmoreFuneralHome.com. In lieu
of Flowers donation in his memory may be sent to Regina Cleri Residence,
60 William Cardinal O’Connell Way Boston, MA 02114 or to Saint Mary’s
Church 8 Church St., Holliston, MA 01746.