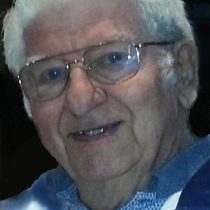 Donald H. Oneto died Sunday, December 20, 2020 after a brief illness with COVID-19 at Newton Wellesley Hospital in Newton MA, he was 88 years old.  He was the loving Husband of his pre-deceased wife Patricia A (Kelly) Oneto, Pat of sixty years. – according to his wishes her Cremains are with him here so they may have a proper funeral mass and internment together.  They are survived by their two children, Scott Oneto, his wife Cinthia Oneto; Patricia (Oneto) Horrigan,  her husband Joseph Horrigan, three grandchildren Patrick Horrigan, Dawn (Horrigan)Wetherbee and Michael Horrigan, their spouses and six great-grandchildren; He is also survived by His loving Sister Maureen Dunphy of Gilford NH,  her children Lisa Russo and Bobby Dunphy.

Donald was born in Cambridge; Patricia was a proud First-generation Irish American from Southie. They met at the Employers group in Boston were married in 1953, and as a newlywed he joined the Army to serve in the Korean War as a radio morse code interceptor for two years. Upon his return they lived in Cambridge. He started at St Paul Insurance as a property underwriter. They moved to Arlington.  Don eventually rose through the ranks to become assistant General Manager and retired after a long career there.  They moved to Bedford MA. when Pat, his wife was in her forties she was afflicted with Multiple Sclerosis.

They moved to Hookset NH. For more than 20 years Donald courageously helped his wife Patricia fight a battle with the debilitating disease. Her legs barely could be moved and was wheelchair bound, but that never stopped him from lifting her in and out of her chair, bed, bath or car as they loved to visit and eat out. Patricia passed in January 2013 after a brief illness. In April 2014 Scott and Cinthia moved back in to help take care of him, as he now needed assistance. Donald moved in with Patti and Joe in October 2016 in Medway, moved briefly to Marlborough, and finally Millis MA November 2017 into a new handicapped accessible home. He lived with Patti and Joe in Millis along with Dawn, Her son Aedan and the dogs boo and Alex, he was never alone with a busy three ring circus. With Boo barking at every new noise or visitor. We celebrated many family holidays and meals with all his grandchildren and great grandchildren, always expressing his unique dry sarcasm and comments which were always affectionate, humorous, and witty. they will be missed by all.

He always watched Fox News, even when sleeping in his recliner in the living room. He also would listen to books on tape supplied for free by the Perkins school for the blind.