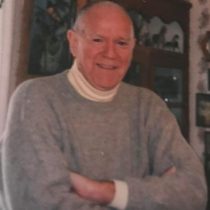 Donald C. Morrison, 89, of Sherborn, passed away on Saturday, January 15, 2022. Born in Boston, he was the son of the late Victoria (Banner) and William R. Morrison. He was the husband of 50 years to Ellyn (Murch) Morrison.

Donald earned his Master’s Degree at Boston University and his Doctorate at Harvard University. He was a veteran of the Airforce and had worked as a guidance counselor at Holliston Middle School. He enjoyed gardening and spending time at the beach.

In addition to his wife, he is survived by his sister, Cordelia Swanson of Indiana as well as many nieces and nephews. He is predeceased by his siblings, William “Billy” Morrison and Victoria E. Hughes.

Private family burial will be held at Lake Grove Cemetery in Holliston. Arrangements are under the care of the Chesmore Funeral Home of Holliston.