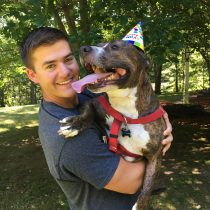 Daniel James Lynch, 25, of Mendon and formerly of Holliston, passed away on Sunday, September 9, 2018 as a result of a motorcycle accident. Born in Framingham, he was the son of Barbara A. (Pospisil) Lynch of Holliston, and Shawn R. Lynch Sr. and his wife, Gina of Holliston.

A 2010 graduate of Keefe Tech High School, Dan enlisted in the Marine Reserves and left for boot camp in 2012. During his honorable six-year career as a Marine, he qualified each year as an expert rifleman and worked his way up from rifleman to team leader, and later to squad leader. Dan trained all over the United States and was an essential element in operation African Lion where he had the opportunity to train our African allies. He finished his military career as a corporal with 1/25 alpha company, with whom he served his whole career. Dan was a member of the IBEW Local 326 and had been employed as a Transmission Lineman with National Grid. Dan held a Master Electrician’s License and was a former Explorer on the Holliston Fire Department. He had a passion for cars, motorcycles and all New England sports teams, but had special fondness for the Boston Red Sox.

Along with his parents, Dan is survived by 6 siblings; Shawn R. Lynch Jr. and his wife, Alexis of Northbridge; Nick G. Lynch of New York City; Samuel A. Lynch, Jake K. Lynch, Annabelle G. Lynch, and Kadence M. Lynch, all of Holliston; his significant other, Dr. Paige B. Carr, PharmD and her family of Mendon; his grandmother, Barbara A. Pospisil of Framingham; his niece and goddaughter, Brooklyn R. Lynch and nephew, Theodore J. Lynch. He also leaves behind four aunts, Joanne Llambias, Leighann Becker, Jennifer Pospisil and Sharon E. Lynch. Dan will be especially missed by his beloved dog, Dallas, or as he liked to call him, “Dally O’Malley”. He is predeceased by his Paternal Grandfather, Edward J. Lynch, Sr. and Grandmother, Frances H. Lynch (Byrne) formerly of South Natick, Maternal Grandfather, George H. Pospisil formerly of West Boylston, and his uncles Edward J. Lynch, Jr. and Kevin F. Lynch both formerly of South Natick.

Visitation will be held on Thursday, September 13th from 4:00-8:00 p.m. at Faith Community Church, 146 East Main St. Hopkinton. A funeral service will take place at the church on Friday, September 14th at 11:00 a.m. The burial will be done at a later date at Glenwood Cemetery in South Natick. Donations in Dan’s name may be made to Handsome Dan’s Dog Rescue, or any Veterans Services. Arrangements are under the care of the Chesmore Funeral Home of Holliston, www.ChesmoreFuneralHome.com