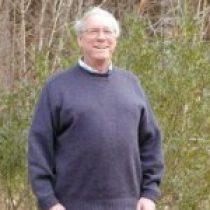 Dale Cameron Cook of Woodville (not Hopkinton), MA, died the morning of December 1, 2012. Dale passed away peacefully in his sleep at home, where he had lived for more than 20 years with his wife, Terry Holden.
Dale was born on July 30, 1940, in Los Angeles, CA, to Lt. Commander George and Jean (Beymer) Cook. The Cooks lived in Altadena, CA, and Dale graduated from John Muir High School in 1958. As a young man, he discovered a love for electronics, and he would often take apart and put back together devices to see how they worked. He was an avid amateur radio operator, with call letters K6IUL. He and his father constructed a 60-foot tower in their back yard, and he was able to pull in signals from all over the world.
He attended Stanford University in Palo Alto, CA, and received dual degrees, including an MS in electrical engineering in 1963. After graduation, he married his first wife, Mary, and moved to Phoenix, AZ, where the couple had their first son, Nathanial. The family later moved to Massachusetts, where their second son, Bryan, was born. For many years, Dale worked at Digital Equipment Corporation in diagnostics, and he later taught about computers at Bentley College and other sites, before his retirement.
Dale loved New England – its nature, landscapes, and seasons – and he often said he considered himself a true New Englander, even though he’d grown up in California. He liked the outdoors, and followed a number of interests there, including orienteering, canoeing, jogging, walking, biking, and cross country skiing. He liked building and repairing things, from Heathkit television sets to an aerial TV antenna that towered above his house back in the 1970s. He also loved mental challenges, including acrostic puzzles and watching “Jeopardy!” He was an avid Ham radio user for a time (his call letters – N1US – were his license plate numbers for years), and he loved cheering on the Boston Red Sox. He loved sharing stories and anecdotes, playing Hearts, and watching “Dallas,” and, later, “House.”
Dale leaves behind his wife and partner of 33 years, Theresa Holden; two sons, Nathanial, of Norwood, MA, and Bryan (Kirsten), of Okanogan, WA; a brother, Marshall (Ellen), of Madison, WI; a nephew, Jeremiah (Kimberly), of Stoughton, WI; and many other friends and family members, who will miss him dearly. A private ceremony for family and friends will be held for Dale in the near future.