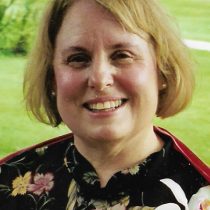 Mrs. Charlotte “Char” Jean Barnes Sidell (née Barnes), of Needham, MA died unexpectedly, with her husband by her side, on February 24, 2018.  She was 71 years old.

Char is survived by her husband, Richard Sidell, of Needham, her son, Philip Sidell and his wife Christina, of Roslindale, MA, her daughter Kate Morton and her husband Andy of Holliston, MA, her brother Doug Barnes and his wife Lindy of Lake Ann, MI, and her three grandchildren, Margaret, Quinn and Jane.  She is preceded in death by her parents Earl and Sophie Barnes of Tarpon Springs, FL.

Char was born on May 2, 1946 in Newark, NJ to Earl and Sophie Barnes.  She graduated from Livingston High School in Livingston, NJ before earning her BA in Elementary Education and Spanish from Juniata College in Huntingdon, PA in 1968.  While a student at Juniata College she spent her junior year in Valencia, Spain where she became fluent in Spanish and began a lifelong love affair with travel.  She went on to earn an M.Ed. in Child Study from the Eliot Pearson School of Tufts University in 1972 and an M.L.S. in Children’s Library Services, Public Library and School Library from Simmons College in 1991.  She met her husband, a graduate student at MIT, in Cambridge in 1969 and married him in Livingston, NJ on April 18, 1970.

Char believed the secret to a happy life is to live your avocation, which she did.  In every professional position she held she poured herself into her work. She began her career in the Chelsea Public Schools, first as a Title 1 Librarian and then as a 4th grade teacher.  In 1971, she was hired as a 2nd and 3rd grade teacher at the McCarthy-Towne School in Acton, a unique pilot school where teachers were given freedom to transform education into a hands-on integrated experience. She left briefly to welcome her son into the world, and then returned as a kindergarten teacher. Following the birth of her second child, Char returned to teaching, but for much younger children, at the Red Barn Cooperative Nursery School in Weston.

After a fulfilling 12 years teaching nursery school and using books as her main tool to reach, inspire, and ignite children, Char decided it was time to unite her love of teaching with her love of children’s books.  She returned to school to earn her degree in Library Science, and became a children’s librarian at the Wellesley Free Library in Wellesley, and a teacher librarian at both the Deerfield School in Westwood and the Broadmeadow School in Needham.  By 1997, she was happily employed as the full time librarian for the Broadmeadow School.  She remained there until she retired in 2014.  Char shared her gifts and love of books with countless children, teachers, and parents.  She was highly regarded as the person who could find the perfect book for every single person because she took the time to know people.  While at Broadmeadow, she taught classes on children’s literature, and offered a very popular professional development course on the Caldecott Medal.  She was also dedicated to improving the educational experience for METCO students and forged important relationships and partnerships with them and their parents.

After retiring from Needham, Char’s indomitable spirit and dedication to social justice left her wanting more.  She became a volunteer librarian for the Codman Academy, a charter school in Dorchester and was honored in a ceremony in the spring of 2017, as Volunteer of the Year for her efforts in creating a school library and acting as teacher librarian.  She first became familiar with Codman when working at the Broadmeadow School, where she reveled in the opportunity to work with student interns and develop their dedication to books, children and education.  Her time at Codman was especially meaningful to her.  She delighted in getting to know each and every child and building relationships with them.  She gave the students books as gifts from her heart, and she was proud of the library she created there.

Char’s friends and family often wondered how she found time to do everything.  She was a treasured wife, mother, grandmother, sister, aunt, daughter and friend who was actively involved in numerous clubs, activities, and organizations.  Her involvements included the Needham Education, Historical, and Library Foundations, several book clubs, two garden clubs, a bridge club and the League of Women Voters.  She was a member of the Prospectors Ski Club from 1980, serving as president in 1994.

She loved music and travel.  Char and her husband were season ticket holders to the Boston Symphony Orchestra for 46 years and attended every Christmas Revels performance in Cambridge from their inception.  She had the opportunity to visit Spain, Italy, and Germany as a college student and China with Primary Source on two occasions.  She joined her daughter in Tanzania and her son in Japan.  With her husband and friends she visited such places as countries in Africa, Europe and South America, Antarctica, Malaysia, and the Mount Everest Base Camp.

A gracious hostess, she welcomed people into her home for parties, celebrations, showers, and remembrances.  Char was a giver who lived a magical and blessed life without regret.  She gave of herself freely, and spread her light everywhere she went.

There will be a celebration of her life, a life lived beautifully, on Sunday, March 18 at 2:00 pm at the Holliston Congregational Church, 725 Washington Street, Holliston.  All are welcome. In lieu of flowers please consider making a donation to the Char Sidell Fund at Codman Academy Foundation to help honor her legacy and commitment to bringing books to all children. https://donatenow.networkforgood.org/charsidell

Arrangements are under the care of the Chesmore Funeral Home of Holliston, www.ChesmoreFuneralHome.com