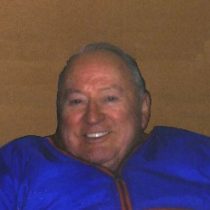 Charles A. Holman, 81, of Hopkinton, died Saturday, September 25, 2004 at the MetroWest Medical Center of Framingham.
He was the loving husband of Carolyn (Henderson) Holman for 50 years.
Born in Somerville in 1923, he was the son of the late Charles and Edith (Gilliat) Holman. He graduated from Ashland High School, Class of 1940.
At the age of 16 years, he learned to fly at Teddy Gould’s Field in Framingham (former GM plant). He went on to join the Army Air Corps and flew 31 Missions as a B-17 pilot at the age of 20, with the 91st Bomber group in England and also participated in the first deep penetration raids to Berlin in March 1944. For his efforts he was awarded the Distinguished Flying Cross with 3 oak leaf clusters, the European African Middle Eastern campaign ribbon with 1 Bronze star, and the Presidential Citation with 1 Battle star.
After the war, Mr. Holman was a commercial airline pilot with North East Airlines, which later merged with Delta Airlines. He retired in 1983 after more than 30 years with the airlines.
Charles was an active member of many organizations including the Masons, John Warren Lodge, North Star Lodge, Charles River Shrine Club -Myrtle Chapter OES, Legion of Honor at Aleppo, Colonial Craftsman Club, past Masters Assn. At Aleppo, Valley of Boston Scottish Rite, Kachina Billikan Klub, Royal order of Jesters, Milford Commandery, Past Masters Assn – Natick 23rd, Milford Council, Demolay Uncle, Tunis Temple – Ottowa Canada, Sword of Bunker Hill, Parker – Concord RAC Natick, St. Andrews RAC Boston, American Legion Post 202 Hopkinton, Serpico CIA of ROJ Aleppo Temple, Shrine Flyers of Aleppo, Quiet Birdman – Boston Hanger, Knights Templar Eye Foundation Inc – life sponsor. A Retrired pilot he had licenses for single and multi engine, rotorcraft, helicopter, and lighter than air free ballon.
In addition to his wife, Mr. Holman is survived by four children: B. Scott Holman, Gail Remby and her husband John, and Jill Bolin, all of Hopkinton, as well as Dean Holman and his wife Rochelle of Westford. He is also survived by his 7 grandchildren, Elizabeth, John, and Christine Remby, Donald Bolin, and Nichole, Corey, and Mitchell Holman. Mr. Holman has numerous nieces and nephews around the country.
Visiting hours will be Wednesday, September 29 from 4 to 8 pm at Chesmore Funeral Home, 57 Hayden Rowe in Hopkinton. A funeral service will be held on Thursday, September 30 at 11 am at the First Congregational Church in Holliston, 725 Washington Street, Holliston. Burial will follow at Wildwood Cemetery, Ashland. Mr. Holman was very active in Free Masonry and the Shrine. In lieu of flowers, donations in Mr. Holman’s memory may be made to the Boston Shriner Burns Institute, 51 Blossom Street, Boston, MA. 02114.