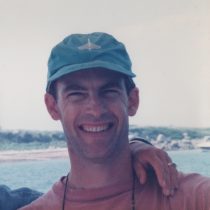 Benjamin Barnes Stone of Holliston, MA passed away from a brain tumor on Thursday, May 4th 2017, in the arms of his loving family. He was 63 years old.

Ben was the son of the late David B. Stone and is survived by his wife, Susan H., his daughter, Meredith, his son, Michael, his mother, Sara C. Foster; his brothers, Peter, Jonathan, Drew and Daniel, and their families; and by the family of his late brother, David.

Ben was defined by his devotion to his wife, children, his brothers and his family at large, and his quiet, steady kindness and gentle ways. He was raised in Dedham, MA and spent summers in Marion, MA on Buzzards Bay, where he fell in love with the water and all things in it.

Ben graduated from Middlebury College (BA,1976) and the University of Maine at Orono (MS, 1979) before earning a doctorate in microbiology from Cornell University (PhD, 1988). He spent his career in biotechnology with an expertise in assay development.

While his career focused on the molecular level, Ben’s hobbies and passions were an extension of his scientific mind. He explored the world with a methodical creativity and took great pleasure in wooden boat building. Ben built three seaworthy vessels and countless models over the years, in addition to fine furniture. Later, he developed a feverish passion for fly-fishing and fly-tying, which he shared with his children and family.

Ben was happiest on a porch or a boat, sharing tales of the day with his family and friends. He lived each day with purpose and appreciation.

A memorial service will be held on Thursday, June 1st, at 11:30 am at The New England Aquarium in Boston, MA.  In lieu of flowers, donations can be made in Ben’s honor to the New England Aquarium c/o the Development Office, Central Wharf, Boston, MA 02110 or by calling (617) 226-2134. Arrangements are under the care of the Chesmore Funeral Home of Holliston. www.ChesmoreFuneralHome.com