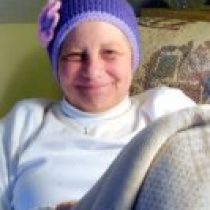 Barbara J. Comeau, 56, of Hopkinton, passed away Sunday, December 21, 2014. Born in Canada, she was the daughter of Janet Louise Douglass and the late Richard Nelson Clark.

Barbara was a graduate of Atlantic Business College and had worked at Collella’s in Hopkinton. She enjoyed knitting, baking, and was involved in the Michael Lisnow Respite Center and participated in Michael’s Run.

Visitation will be held on Monday, December 29th from 12:30-1:30p.m. at the Chesmore Funeral Home of Hopkinton, www.ChesmoreFuneralHome.com A funeral home service will follow at 2:00p.m. Burial in Canada will take place at a later date. In lieu of flowers, donations in Barbara’s memory may be made to Pancreatic Cancer Research or to Michael Lisnow Respite Center, 112 Main St. Hopkinton, MA 01748.