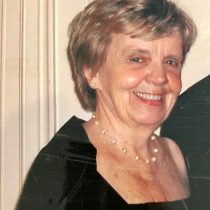 Winifred “Winnie” (Ford) Moore, 91, of West Hartford, Conn., died peacefully on November 4, 2019, surrounded by family. Winnie was born on February 28, 1928, and grew up in Sea Cliff, NY.  She and her husband Jim spent the early years of their married life in East Norwich, NY, before relocating to West Hartford in 1967. With a family of six kids, they embraced all the town had to offer — from Jim’s employment with the West Hartford Public schools, to Winnie’s participation in town government. They were also active parishioners of St. Peter Claver RC Church. Late in life, Winnie moved to Mass. to be near her oldest daughter.

A defining aspect of Winnie’s life was her 45-year affiliation with the League of Women Voters, which gave voice to her fierce belief in the importance of community engagement and the power of female  friendship. She once described her introduction to the League in a speech: “I never knew women talked like that — smart, engaged, and passionate about important issues. My work in the League taught me to think critically, to analyze all sides of an issue, and to represent the full range of any topic. It was exhilarating.” She served as Vice President of the West Hartford League, and was a delegate to the LWV national convention in Atlanta in 1972, keynoted by Jimmy Carter.  Her association with the League led to a deeper engagement in local government, first as a member of the Zoning Board of Appeals, and later as a member of the Charter Revision Commission. Through the League she also fostered a network of deep and lasting friendships. The self-described Old Broads are an inspiring group of women — intelligent, opinionated, quirky, hilarious, and profoundly supportive of each other.

Winnie worked at Asylum Hill Congregational Church in Hartford, where she pioneered a multi-church initiative to coordinate care for needy members of the community. This program led to the founding of the Loaves and Fishes Ministries.  She later worked as Executive Assistant to the Chairman of Newington Children’s Hospital, and ultimately for the Chairman of Medspan Healthcare. Ask anyone to describe Winnie Moore, and chances are they’ll talk about her incredible warmth.  She was smart and curious, energized by people and their stories. In the words of one of her granddaughters, “you always wanted to be the person Grandma Winnie saw in you.” She was an effortless entertainer who drew people in and made them feel welcome.  Winnie was happiest when her house was filled with the bustle of family and friends. Countless evenings ended gathered around the fireplace “solving all the problems of the world.”

Winnie was predeceased by her beloved husband Jim, whom she had known since high school, and her cherished “sissie” Mary Margaret McAuliffe. She is survived by her brother Joseph Ford of Atlanta, Ga., and his wife Carol, as well as her brother-in-law, John McAuliffe, of East Norwich, NY.  She leaves six devoted children and their families: Jim and Susan Moore of Athens, Ga., Michael and Colleen Moore of Stamford, Conn., Winnie and Greg Carey of Holliston, Mass., Mary-Alice Moore and Chris McAleese of Fairfield, Conn., Kevin and Christy Moore of Higganum, Conn., and Patrice and Larry Vogt of Chatham, NJ.  She will be greatly missed by her twelve grandchildren and nine great grandchildren.

The family will receive visitors on Thursday, November 21 from 4:00 – 7:00 pm at the Town & County Club on Woodland Street in Hartford.  A memorial Mass will be held on Friday, November 22 at 10:00 am at St. Peter Claver Church in West Hartford, followed by a luncheon at the Town & County Club.  In lieu of flowers, the family requests that donations be made to the Loaves and Family Ministries www.loavesfishesministries.org. Arrangements are under the care of the Chesmore Funeral Home of Holliston.