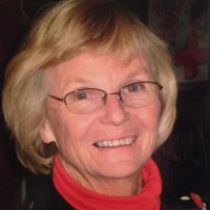 Holliston-
Wilma Audrey (Sherman) Ghelli age 82, passed away on Thursday, March 26, 2015 at Mary Ann Morse Nursing Home in Natick MA. Born on March 15, 1933, the fifth child of seven, born to the late George & Gertrude (McCue) Sherman of Holliston. In 1951, “Willie” graduated from Holliston High and proceeded to work for the Telechron Company in Ashland as a secretary, until she married “the boy next door”, the late John Ghelli in 1956.

While raising a family, Wilma also worked as a waitress for many years at Walter’s Dairy. She was very involved with the preservation of town history and enjoyed researching family genealogy. She was an avid collector of historical postcards and maps of her hometown. She contributed many items to the Holliston Historical Society and Town Hall over the years. She enjoyed gardening, collecting and restoring antiques, traveling with friends, as well as spending time at her beach haven near Horseneck Beach in Westport, MA. She lived her entire life in the ?Braggville’ section of Holliston.

She is survived by her three children; Deborah (Ghelli) Attardo and Michael of Braintree, Paul Ghelli and Joanne of Holliston, and Diana (Ghelli) Reid and Patrick of Hopedale, as well as nine grandchildren ages 15-30. She is also survived by siblings; George Sherman & Frances of Eldorado Hills CA, Ralph Sherman and Luanne of Portland OR, Liela (Sherman) Hanna and Jim of Ashland MA; Paul Sherman and Pam of Medford OR.

Visitation will be held on Sunday, March 29th from 3-6 pm at the Chesmore Funeral Home of Holliston, 854 Washington St. www.ChesmoreFuneralHome.com A Funeral Service will be held on Monday, March 30th at 10:30a.m at the Congregational Church, 725 Washington Street, Holliston. Burial will follow at Lake Grove Cemetery on Highland Street in Holliston. In Lieu of flowers, donations would be appreciated in Wilma’s name to the Holliston Food Pantry 23 Water Street.