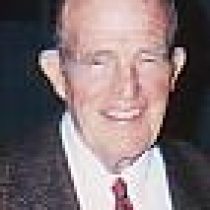 Holliston – William Thompson Goward, 83, of Holliston Died Wednesday February 25, 2004 at the Metrowest Medial Center Framingham Campus. Born in New York he was the son of the late Henry and Charlotte Goward.

A Marine Corp veteran, he was a Captain in WW II and Korea where he served as a pilot. Bill was raised in Ridgewood, NJ and was a longtime resident of Holliston. He was a graduate of Fairleigh Dickerson University and had been employed as a former Eastern Sales Manager for H J Heinz Co.

Visitation hours will be at the Chesmore Funeral Home of Holliston on Sunday February 29, 2004 from 4 to 7 pm. A funeral service will be held in the First Congregation Church of Holliston on Monday March 1, 2004 at 11:00 am. In lieu of flowers memorial donations may be made in his memory to Alzheimer’s Association, 36 Cameron Ave, Cambridge, MA 02140