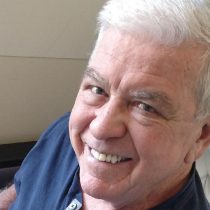 On Thursday, July 23rd, 2020, Bill Dooling, loving husband, father, and grandfather passed away peacefully at his home in Holliston at the age of 77.

Bill was born on May 31, 1943 to Helen (O’Neil) and Thomas Dooling of Country Waterford, Ireland. He was raised on Mission Hill with his 2 brothers and 3 sisters. In 1964 he met the love of his life, Carol Scott, they were married for 52 years.

Bill was a veteran who received a direct commission while serving in Vietnam. Throughout his life he worked tirelessly with and for Veterans in the political arena.

For 30 years, Bill was a beloved teacher at Millis High School. He derived extraordinary joy from his students and always believed he had “the best job in the world.” His teaching didn’t end when he retired. His former students continued to be a source of laughter, delight, and happiness throughout his life.

Bill was a voracious reader, a lifelong learner who earned 3 Masters Degrees, and was gifted with profound curiosity and remarkable wit.  Bill was an extraordinary husband, teacher, father, friend. The lives of everyone Bill touched are better, much better, because of their relationships with him. He was unrelentingly caring and attentive to the needs of others. We can still hear his laugh and see his smile.

Visitation will be held on Wednesday, July 29th from 4:00-8:00 p.m. at the Chesmore Funeral Home of Holliston, 854 Washington St. www.ChesmoreFuneralHome.com A funeral mass will be celebrated at 11:00 a.m. at St. Mary’s Church of Holliston on Thursday, July 30th. Burial will take place on Friday, July 31st at Bourne National Cemetery. In lieu of flowers, donations in Bill’s memory may be made to New England Center and Home for Veterans, https://www.nechv.org/  *Due to current restrictions, facial coverings must be worn and social distancing must be adhered to.