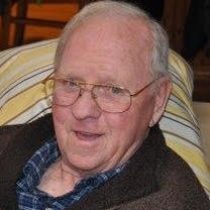 William P. Monahan, 82, of Scituate, and a former West Yarmouth and longtime Holliston resident, passed away peacefully at home on Friday, August 25, 2017, surrounded by his family.  He is the beloved husband of 48 years to Patricia A. (Higgins) Monahan.

Born and raised in Quincy, he was the son of the late John and Sara (Macmurray) Monahan.  He was a graduate of Quincy High School. Bill proudly joined the United States Navy and served in the Korean Conflict.  After serving his country, he attended Stonehill College, where he earned his Bachelor’s Degree in accounting. Prior to his retirement, Mr. Monahan was employed by Digital Equipment/ Hewlett Packard as an accountant. He enjoyed golfing, watching his favorite sports teams, and most importantly, spending time with his family.

In addition to his wife, he is survived by his four children, William P. Monahan, Jr. and his wife, Crystal, of Scituate, James Monahan and his wife, Melissa, of Medway, Maryellen Trzecieski and her husband, Allen, of Buford, GA, and Sara Sheehan and her husband, Christopher, of Medway; eight grandchildren, Graeme Monahan, Jake Monahan, Celia Monahan, Kayla Hood, Patrick McWilliams, William Trzecieski, Charlee Trzecieski, and Ryan Sheehan; one great-grandchild, Elora Hood; three sisters, Mary Mckearney of Weymouth, Jean Davis of Rockland, and Andrea Sault and her husband, Peter, of Quincy; and many loving nieces and nephews. He was the brother to the late, Sara Russo, John Monahan, Edwin Monahan, and Albert Monahan.

Visitation will be held on Monday, August 28th, from 5:00 to 8:00 P.M. in the Chesmore Funeral Home of Holliston, 854 Washington St.www.ChesmoreFuneralHome.com. His funeral Mass will be held on Tuesday, August 29th, in St. Mary’s Church of Holliston at 10:30 A.M.  Burial with military honors will follow in the parish cemetery. In lieu of flowers, donations in his memory may be made to the Jimmy Fund at Dana-Farber Cancer Institute and the Jimmy Fund P.O. Box 849168 Boston MA 02284.