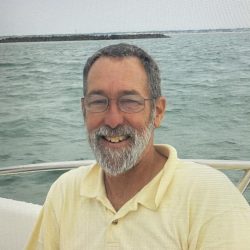 William Gregory Doherty III, “Greg,” passed away on December 17, 2020 at the age of 74.  Born in Newton, MA on November 26, 1946 to the late William Doherty Jr. and the late Marilyn Moore Doherty, Greg grew up in the Oak Hill section of Newton playing hockey with the neighborhood kids and graduated from Newton South High School in 1964.

Greg met the love of his life, the late Judith Plummer Doherty, while still in high school. They married in 1968 and eventually settled in Holliston. Greg was a loving husband and proud father with his family at the center of his daily life.Greg, an experienced mechanic, opened Greg’s Service Station in Holliston and ran the station until 2001.

Greg and Judy spent much of their time in West Dennis enjoying their summer home, the beach, sunsets, the pond and beyond, and their street friends. Judy passed away in 2010. Greg impacted the lives of so many people.  He was known for his outgoing personality, the ability to tell a story, and the friends he made everywhere he traveled. Greg’s easy laugh surrounded him wherever he went.

Greg is survived by his son, Keith Doherty of Holliston, his daughter, Kerry Doherty Laberge of Farmington, CT, son-in-law Adam, granddaughter Avery and grandson Cullen.  He is also survived by his siblings, Stephen Doherty of Kalamazoo, MI and Beverly Robinson of New Smyrna Beach, FL.

As soon as it is once again safe to meet in person with friends and family, an absolute rager will be held in Greg’s honor. Arrangements are under the care of the Chesmore Funeral Home Holliston. Www.ChesmoreFuneralHome.com