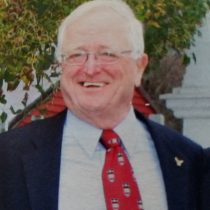 William David Tobin, 81, of Holliston, passed away on May 15, 2017, surrounded by his family. He was the beloved husband of 57 years to Anne (Smith) Tobin. Born in Concord, MA, he was the son of the late Eden Joseph Tobin and Eleanor (Aileen) Murphy Tobin.  Bill grew up in Maynard and graduated from St. Mary’s High School in Waltham.  He then went on to Boston College where he received a Bachelor’s and Master’s Degree in business.

He was a commissioned officer through the ROTC program, entering the Medical Service Corp.  He also served in the Army Reserves as Captain.  Bill began his career as an accountant at General Motors and then worked as an administrator at MIT, New England Deaconess Hospital and UMass Medical Center.

After retiring, he became one of the co-founders of the hugely popular HollistonReporter, an online newspaper which gave him the opportunity to inform the citizens of his town about all the local happenings, which he really enjoyed.  He also became treasurer of his Boston College Class of 1957 and the promoter of many class activities gave him great pleasure.

In addition to his wife Anne, he is survived by his six sons and their families, David and Susan of Wellesley, Christopher and Jane of Holliston, Paul and Christine of Holliston, Matthew and Elisa of Medway, Andrew and Patricia of Franklin, and Michael and Nena of Brewster; two cousins, Frances Shea of Harwich Port and Sarah Healy of Sudbury.  He was most proud of his 15 grandchildren who all had the same last name.

Visitation will be held on Monday, May 22nd, from 4:00-8:00 P.M. at the Chesmore Funeral Home of Holliston, 854 Washington St. www.ChesmoreFuneralHome.com. A funeral mass will be celebrated at 10:30 A.M. on Tuesday, May 23rd, in St. Mary’s Church of Holliston.  Burial will follow in St. Mary’s Cemetery in Holliston. In lieu of flowers, the family requests donations in his memory to be made to the St. Mary’s music program, or the Friends of Holliston Trails, Inc. c/o Marc Rosenfeld, 7 Springdale Circle, Holliston, MA 01746.