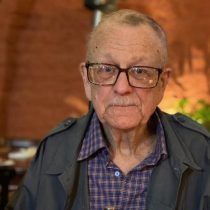 Interment to be held at Bourne National Cemetery

William C. Harrington of Holliston, Massachusetts passed away at his home July 17th after an extended illness. He leaves behind his wife Diana, daughter Maya, and three grandsons Paul, Stephen (Sparky) and Curtis.

Will was an accomplished sculptor and painter to the end of his life. He was influenced in high school by a bold break-away from New York norms taking place in his hometown of Chicago. The new Chicago Image was surrealistic, grotesque, colorful and vibrant. For his art during his high school years, he was awarded a scholarship and used it to earn earned a BFA from the University of Illinois. After college, another scholarship took him to the University of Hartford’s Hartford Art School were he earned a MFA in Sculpture. Working in the summer for George Rickey, he helped construct the kinetic, “useless machines” Rickey was known for. Shortly after his graduation, he was drafted into the US Army.

After Officers Candidate School, in spite of being trained in tanks, he was stationed in a logistics command in Germany, which allowed him to continue painting with the backdrop of 1966 Germany. He was then chosen to lead the U.S. Army Combat Artist Team VII in Vietnam. His experience there was intense and it profoundly influenced his life’s work.

Following military service, Will taught art at Indiana State University and then Iowa State University and, having no experience as a builder, built a cabin on a newly acquired 85 acres in the Blue Ridge Mountains of Virginia.  With nothing but an idea, the “Whole Earth Catalog,” and a strong back, he and his wife set out to build a cabin and studio that is still standing and being used today.

When Will chose to be a full-time artist, he carved large sculptures of wood, used scrap metal, old farm machinery, and other objects. Over the last decade,  his work became increasingly and intensely political and he shifted to three-dimensional wall paintings. His voice was loud, vibrant and unmistakable. After two recent solo shows at Gallery55, Natick, MA, owner John Mottern said “Will was a dynamic sculptor with an extraordinary skill for transforming large trees and branches into mammoth creations representing figures, abstract creature, and mechanical entities that were both provocative and engaging. His understanding of history and nature can be seen throughout his works with attention to humor, intellectual challenge and a touch of visual poetry. In the face of time, Will’s work has deep meaning and clear vision.”

Will published several books representing a large body of three dimensional wall paintings, a complex exploration of history and politics. Will had many solo exhibits in Virginia, North Carolina, and Massachusetts. He was a contributing artist to many group exhibitions around the country, and was a long time member and officer of Tri-State Sculptors.

Will adored his daughter, Maya, from the first moment he met her when she was almost 2 years old. He was a partner to his wife of over 50 years. His three grandsons brought him joy with their curiosity and energy. His family in Chicago, Connecticut, Norway, New Hampshire, and Virginia were always there for him.

Burial will take place at the Massachusetts National Cemetery in Bourne. Arrangements are under the care of the Chesmore Funeral Home in Holliston.