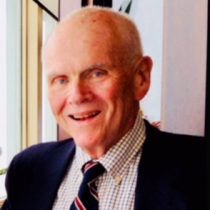 William Barry Hosmer passed away peacefully on January 2, 2018 at home surrounded by his family. Born in Boston on August 6, 1937,  Bill was the son of the late Nathan Dale Hosmer and Mary Barry Hosmer. Bill spent his first ten years in Belmont, where he attended Mount Trinity Academy. The family then moved to Winchester, where Bill attended Winchester schools, graduating from Winchester High School in 1954.

In August of 1954, Bill joined the United States Air Force and served four years, three in Fort Worth, Texas and one in Thule, Greenland. While in Texas, he earned a year’s college credit from Texas Christian University. The Air Force trained Bill as a medic, a skill he used in civilian life as an ER/OR Technician at Winchester Hospital from 1958 – 1972. He worked a nearly full-time schedule while he pursued a B.A. and an M.Ed from Boston University, earning degrees in 1963 and 1967.

Bill married Mary Lois Sullivan in 1963. They shared fifty-four blessed years together. He is survived by Lois, their daughters, Mary Hosmer Fanucci and her husband Jerry, of Lexington, and Sara Hosmer, of Roslindale, and his grandchildren, Abigail, Ben and Kristina Fanucci. He is also survived by his brother John R. Hosmer and his wife, Judy, of Charlotte, North Carolina, his brother-in-law, Timothy J. Sullivan and his wife, Mary, of Queensbury, New York, as well as many nieces and nephews. Bill was predeceased by his parents, his brother, Bob, his brother-in-law, Bill Sullivan, and sister-in-law, Marcia Sullivan.

In 1964, Bill began his career in education at Woburn High School as an English teacher. He became head of the English Department and introduced AP classes to the school. Bill taught at Woburn High School from 1964 – 1971. He took great pleasure in the many accomplishments of his Woburn students. During this time, he began studies to earn his Ed.D at Boston College, which he completed in 1977.

In 1972 Bill became Assistant Principal at Holliston’s Middle School and eventually Principal and Director of Elementary Education. He served the schools in Holliston from 1972 – 1980. It was deeply satisfying for him to see many of his former students thriving as businessmen in their hometown. He had many lasting relationships with the wonderful faculty there.

In 1980 Bill was named Superintendent of the Hopkinton Public Schools. Over a period of sixteen years, he oversaw many changes in every facet of the system. Bill established a close working relationship with EMC, and they generously provided the schools with financial help and technology advice and equipment. His years at Hopkinton provided many happy memories and relationships. While there, he attended student and community events of all kinds like sports, drama, music, and PTA fundraisers. He retired in 1996.

After retirement from Hopkinton, Bill became the Director for Effective Instruction at Worcester State University. He retired in 2012 at the age of seventy-five. During this same period, he served as an adjunct professor for Framingham State University’s International Schools Program. He made sixteen trips abroad to North, Central and South America as well as Europe, Asia, and the South Pacific. His wife, Lois, accompanied him on these trips and they also enjoyed traveling together to Ireland, Greece, Italy, France, Germany, Switzerland, Canada, Bermuda, and many parts of the United States.

He was a loving husband and father and the proudest Grandpa anywhere. Good memories will sustain the family as they miss his presence. Annual summer trips to Cape Cod, a family trip to Ireland, the Boston Pops at Christmas, birthday outings and so much more will forever recall his enthusiasm and dedication to his family. Bill enjoyed many friendships that took him out to breakfast, lunch, and golf. He was a devoted member of St. Mary’s, Holliston where he attended Mass regularly and was moved by the music of the choir and folk group.

There will be two days of visitation;  Saturday. January 6th from 6:00 – 8:00 p.m. and Sunday, January 7th from 3:00 – 7:00 p.m. at the Chesmore Funeral Home of Holliston, 854 Washington St. (Rt. 16) www.ChesmoreFuneralHome.com A funeral mass will be celebrated on Monday, January 8th at 11:00 a.m. at St. Mary’s Church of Holliston. Burial will follow in the parish cemetery. In lieu of flowers remembrances in his name may be made to St. Mary’s church, 8 Church Street, Holliston, MA 01746 or to the Holliston Food Pantry, 73 Charles Street, Holliston.