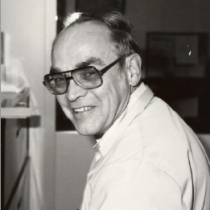 William A. (Bill) Dark passed away peacefully on May 17th, 2019. He was 85 years old. Bill was a resident of Edgewater, FL at the time of his passing. Bill was born in Seneca Falls, NY and was the son of Lorna (Ferry) and Chester O. Dark. He had 1 sibling, Doris A (Dark) Soucy, who predeceased him.

Bill was a graduate of Clarkson College class of ’55, with a degree in Chemical Engineering. Working as a chemist his entire career, Bill had worked for companies such as Union Carbide, Spencer Oil and Gulf
Oil. While working in the early 60’s, Bill enlisted in the Army Reserve. Bill’s role in the Army was Special Forces Group Airborne Green Beret. Bill ended his career working for Waters Corporation in Milford, MA
as an Applications Chemist with over 30 years of dedication with them. While at Waters, Bill traveled throughout the world giving lectures and training in the field of Chromatographic Sciences. His travels took him to places including Russia (USSR), China, Japan, Kuwait, Saudi Arabia and Australia just to
name a few. Bill has written many technical papers which were published and, also held a position on the Editorial Advisory Board for The Journal of Chromatographic Science up until the time of his passing.

Bill, a longtime resident of Holliston, MA had also lived in West Virginia, Kansas and Texas. Bill is predeceased by his first wife, Gloria Joan (Reed) and his second wife, Elizabeth Ann (Smith). Bill is survived by his son, Mark (57), his wife, Linda (Palmer)(56) and two Grandsons, Christopher M.(27)
and Eric K. Dark (25), all residing in Blackstone, MA.

Visitation will be held on Saturday, June 15th from 10:00-11:00 a.m. at the Chesmore Funeral Home of Holliston, 854 Washington St. A service will be held in the funeral home following visitation at 11:00 a.m. Burial will follow in Lake Grove Cemetery.