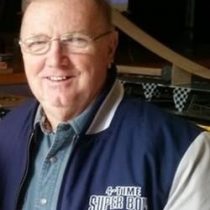 Walter Watson Burgess, 76, passed away at home on Tuesday, March 2, 2021. He is survived by his wife and best friend of 52 years, Dianne Muther Burgess and two sons, James Burgess and his wife, Jennifer and Jacob Burgess and his wife, Julie  all of Holliston. He also leaves behind his four beloved grandchildren, Jim’s children- Cole and Lilly and Jake’s children- Abby and Colton. He is also survived by his sisters, Lois Tougas and her husband, Bill of Waltham and Janet Yurt of Wrentham. He was predeceased by his brother, James of Plymouth, MA.

He was born in Medfield, MA, but spent most of his childhood in Sherborn. He graduated from Framingham High School. Walt was a United States Navy Veteran of the Vietnam War era. He worked at Medfield State Hospital in the power plant while earning his Second-Class fireman’s license and later his First-Class Stationary Engineer’s License. He worked for 29 years at Boston Edison at power plant locations throughout Boston. He concluded his career at Taunton Municipal Lighting Plant and retired after 10 years. Although Walt spent many hours at work, his most important concern was caring for his family. He was a wonderful husband, father, and grandfather.

At the request of his family, the graveside service will be private. A “Remembering Walt Open House” will be held August 15th where the family is inviting friends to join them in celebrating Walt’s life. In lieu of flowers, contributions can be made to Salvation Army, PO Box 311, Framingham, MA 01704. The family thanks Chesmore Funeral Home, Holliston for their assistance in making arrangements. www.ChesmoreFuneralHome.com