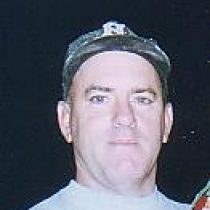 Walter Curley Jr., 55, of Holliston died unexpectedly on Wednesday, January 7, 2004 while playing hockey in Westborough. Born in Brookline, He was the son of the late Walter and Donna (Hackenson) Curley. He was the husband of Linda (Garvey) Curley of Holliston.

A Holliston resident since 1976 and formerly of Natick, Walter was a self-employed plasterer and painter for many years. Walter was defenseman on many local hockey teams and a softball player for teams including the Holliston Police and Holliston Men’s league. He had also coached Little League softball and baseball. Walter had formerly worked as a police dispatcher for the Town of Sherborn and as a special auxiliary police officer in Holliston. He enjoyed writing songs and articles several of which were published in the Middlesex News.

Besides his wife Linda, he is survived by a son; Michael W. Curley of Holliston and Ft. Hood, Texas, 2 daughters; Karen Glasier and her husband Robert of Holliston, and Cathy Coffman and her husband Howard of Southborough, 3 grandchildren; Bobby, Emily, and Alec, 4 brothers; Wayne Curley of Maine, Kenneth Curley of New Hampshire, Gregory Curley of Medway, and Teddy Curley of Framingham, 4 sisters; Marilyn Kent of Westborough, Maureen Curley of Hopkinton, Donna Jean “DJ” Curley of Framingham, and Sandra Dow of Wrentham. He also leaves many nieces, nephews, other extended family, and his dog Pup.