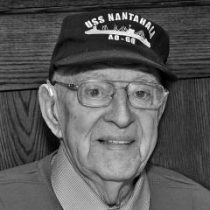 Walter Alfred Rossini, 99, lifelong resident of Holliston, died peacefully on Saturday, February 25, 2017 in Marstons Mills. He was born May 1, 1917 in Milford, MA to the late Joseph and Genevieve (Trotta) Rossini.

Walter graduated from Holliston High in 1935 and in 1937 received a degree in business. From 1937-1939 he worked for Rossini Brothers Ice with his father, Joe, and uncle, Tito. He established Walter’s Dairy in 1940 and in 1942 joined the Navy working in payroll at the Fargo Building in Boston. He spent the last 18 months of WWII in the Pacific as a Chief Petty Officer aboard the USS Nantahala. Walter worked with his brothers, Albeno, Alex, and John along with their mother, Genevieve (aka MA Rossini), at Walter’s Dairy until 1984. Walter and his three brothers were all actively involved in the community. To honor their life long commitment, the town of Holliston dedicated the intersection of 126 &16 to them naming it “Rossini Corner.”

Walter married Eileen Marie Hanlon from Medway in 1946.  Eileen died in 1991. Walter leaves 3 children: Walter J. Rossini and wife Virginia of Methuen, Paul Rossini and wife Maria of Holliston and Ellen and husband Jack Goulet of Sandwich. He leaves 9 grandchildren: Cara, Cristin, Tom, Paul, Daniel, Terese, Tim, Catherine, Christina and 7 great-grandchildren. Walter and Eileen were active members of the Vision of Peace – Catholic Charismatic Prayer Group. In addition Walter had a special dedication to the Xaverian Fathers and the Fatima Shrine starting in 1946.  Walter was also a charter member of the Holliston Lions Club and a VFW Member.

Visitation will be held on Friday, March 3rd from 3-7 PM at the Chesmore Funeral Home of Holliston, 854 Washington St. www.ChesmoreFuneralHome.com A funeral Mass will be held at Saint Mary’s Parish in Holliston at 9:00 AM on Saturday, March 4th. Burial will follow in St. Mary’s Cemetery. In lieu of flowers, donations can be made to Xaverian Missionary Fathers, 101 Summer St., Holliston, MA 01746