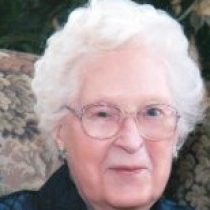 Wally (Valija) (Bralit) Mezitt, 98, of Hopkinton, passed peacefully from this life on Thursday, January 2, 2014 with her family by her side after a period of declining health. The daughter of the late Pauline (Kunst) and Ernst Bralit, she was born in Boston on December 29, 1915.

Wally grew up on a farm in Carlisle and attended Carlisle schools, graduating from Concord-Carlisle Regional High School and was a graduate of Simmons College in Boston. She worked on the farm before and after school with her parents; where she developed a life-long interest in and love of gardening. Her parents were Latvian immigrants and she was very proud of her Latvian heritage.

Wally was the wife of the late Edmund V. Mezitt who died in 1986. After their marriage, she joined her husband in his family’s business, Weston Nurseries Inc. They lived in Weston until 1948 when the nursery was moved to Hopkinton. Wally and her husband traveled extensively to visit gardens around the world and were well-known in many horticultural organizations. Wally was a past president of the Hopkinton Women’s Club and a life member of the Framingham Country Club. She enjoyed reading, gardening, traveling, golf, bridge, knitting, cooking and was dedicated to her family.

Visitation will be held on Sunday, January 5th from 2-4pm at the Chesmore Funeral Home of Hopkinton, 57 Hayden Rowe St. www.ChesmoreFuneralHome.com. Service and burial will be private. In lieu of flowers, donations in Wally’s memory may be made to Tower Hill Botanic Gardens, 11 French Dr. Boylston, MA 01505