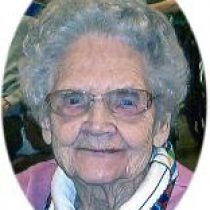 Virginia Wallace, 95, passed away Tuesday, April 27, 2010 at St. Patrick?s Manor in Framingham. Born Nov. 24, 1914 in Framingham, she was the daughter of the late Fred and Florence (Robie) Chapman. She was the wife of the late Arthur “Pete” Wallace.

A resident of St. Patrick’s Manor, and a previous 25 year resident of Rose Kennedy Lane, she was a member of Callahan Senior Citizens Center in Framingham where she played bingo and had many friends. Three of her closest friends were Belle Schepel, Jean Shay and Marion Robison.

She leaves behind 3 daughters and their husbands, Virginia and her husband John Gavel of Sarasota, FL., Gayle and her husband Arthur Kadow of Jacksonville, NC, Elaine and her husband John Magill of Irwin, PA. She is also survived by her sister, Bertha Brown of Wayland, MA. and brother, Dick Chapman of Island Pond, VT. She also leaves behind 16 grandchildren, 29 great grandchildren and 9 great-great grandchildren as well as many wonderful nieces and nephews. She is predeceased by her daughter, Leona Thompson-Gassett-Johnston, her grandson, Billy Gassett, her brothers, Willis and Fred Chapman and a sister, Lillian Ribotto-Rowe.

Visitation will be held on Friday, April 30, 2010 from 5-8p.m. at Chesmore Funeral Home of Holliston, 854 Washington St. (Rt. 16) www.ChesmoreFuneralHome.com A funeral home service will take place on Saturday at 10:00a.m. at the funeral home. In lieu of flowers, donations may be made to St. Patrick’s Manor, 863 Central St. Framingham, MA. 01701.