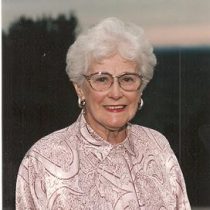 Virginia (Bowen) Riordan, 88, died Wednesday, August 15th at Mary Ann
Morse Nursing and Rehabilitation Center after a brief illness. She was
born in South Natick on August 9, 1919, the daughter of Walter and Helen
(Fair) Bowen.

Virginia, “Ginny” to her friends, will forever be remembered for her
intelligence and strong will. A graduate of Lasell College, she prided
herself on her knowledge of current events, and was rarely without a
strong opinion on the issue of the day. Her interests included politics
and medical science, and she was a passionate Red Sox fan. She maintained
a life long friendship with a group of girls who met in grammar school in
Framingham, dubbing themselves the “Out For Fun” Club (“OFF”). They
maintained a steady schedule of lunches and get-togethers for over 70
years.

Virginia was a resident of Holliston for 42 years, and was a longtime
communicant of St. Mary’s Church there. She was an employee of Filene’s
and Jordan Marsh for many years. She will be deeply missed by her family
and friends.

She was the sister of the late Ruth McGowan, Walter Bowen and Frances
Bowen, and the great aunt of the late Ronald Tomassini.

A funeral mass will be celebrated on Monday, August 20, 2007 at 10:00 am
in St. Mary’s Church on Holiston. Arrangements are from The Chesmore
Funeral Home www.ChesmoreFuneralHome.com
In lieu of flowers, donations may be made to the American Cancer Society