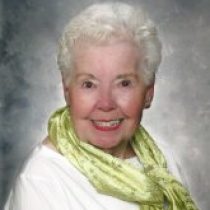 Virginia B. Connelly, age 90 of Sherborn, passed away on Saturday January 31, 2015. She was born to the late Mitchell and Catherine (Kitty O’Neil) Barber on February 19, 1924. Virginia was the beloved wife of Lawrence B. Connelly for 61 years until his death in 2008.

Virginia graduated from Springfield College Library School; her early years were spent as a professional librarian at the Needham Public Library and Boston University’s School of Nursing Library. She was a staff writer for the Middlesex News in Framingham reporting on Sherborn news and as a talented feature story writer. Virginia and Lawrence lived in Sherborn and raised their five children there for 32 years before retiring to Sturbridge; Virginia returned to her much-loved Sherborn where she has happily resided for the last several years.

Virginia was a parishioner at St. Theresa’s Church in Sherborn where she taught CCD for numerous years. She was an active member in the community and served on the Sherborn Board of Library Trustees, Massachusetts State Board of Directors of Library Trustees and the Board of Directors of the Natick Visiting Nurses Association. During retirement in Sturbridge, Virginia was the clerk of the Sturbridge Planning Board, a member of the Beautification committee, a Literacy Volunteer and volunteer at Old Sturbridge Village.

Friends, family, books and flowers were Virginia’s passion and delight. One of Virginia’s greatest pleasures in life was the written word. A voracious reader, she was known by all for her eloquent vocabulary, exceptional conversational skills and entertaining sense of humor.

Virginia was extremely patriotic and was very proud of having worked in a defense plant during WWII; she dubbed herself the “original Rosie” after the well know character “Rosie the Riveter”.

Virginia is survived by her children, Marc and his wife Paula, Susan and her husband Ed, Peter and his wife Hyon Hui, Melissa, and Amy and her husband Bill as well as her grandchildren: Luke, Kitty and Emily Dawson, Jack and Sarah Connelly and Alexandra White. Also survived by her brothers, Fred and William Barber, her sister Ann O’Neil and sister-in-law Marylou Connelly. Virginia also leaves behind numerous nieces, nephews and friends. Virginia’s life was a life well lived.

Visitation will be held on Wednesday, February 4th from 4-7p.m. at the Chesmore Funeral Home of Holliston. www.ChesmoreFuneralHome.com A funeral mass will be celebrated at 11:00a.m. on Thursday at St. Theresa’s Church in Sherborn. In lieu of flowers donations can be made in memory of Virginia to the Campaign for the Sherborn Library 4 Sanger Street Sherborn, Mass. 01770 or online at http://library.sherbornma.org/