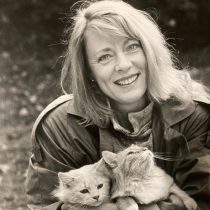 Vicki was an award-winning writer who co-authored, and authored, four best-selling health care books: The Fat-to-Muscle Diet (with Cris Carlin and Peter D. Vash, M.D.) and The Dieter’s Dictionary (with Peter D. Vash, M.D.); as well as The 20,000 Secrets of Tea and The Magic Teaspoon.

Her work has also appeared in many national publications, including Ladies’ Home Journal, Prevention, Shape, USA Today, The Boston Globe, and Glamour. In addition, Vicki was a gifted and largely self-taught painter and sculptor who exhibited her acrylic/oil paintings at local museums and art galleries, including the deCordova Sculpture Park and Museum in Lincoln, Massachusetts.

Vicki was born in Woodbridge, New Jersey, on June 29, 1944 and was a graduate of Douglass College, now a part of Rutgers University. She had a career in marketing in the health care industry, but loved writing fiction and poetry and making art. In the 1980s, she frequently attended the Bread Loaf Writers’ Conference in Vermont. She lived most of her adult life in Massachusetts and has been featured in Who’s Who in the East.

Survivors include her sister Judy Wagner and husband, Cliff of Hertford, North Carolina. She was predeceased by her sister, Kathy Zak, their mother, Leona Zak, and maternal grandmother, Katherine Lembcke.

Services will be private and Vicki’s ashes will be interred in a mausoleum alongside family members at Alpine Cemetery in Perth Amboy, New Jersey. Arrangements are under the care of the Chesmore Funeral Home of Holliston.