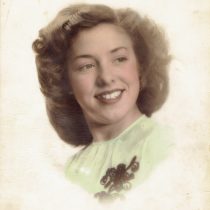 Funeral Service: Tuesday March 26th at 11 am at Christ the King Church in Holliston

Burial: Wednesday, March 27th at 11 am at Lawncroft Cooperative Cemetery in Fairfield, CT

Terry was the daughter of Michael Corso and Elizabeth Ponski Corso.  Born on November 5, 1928 and raised in the city of Bridgeport, Connecticut, Terry attended Sacred Heart Catholic Elementary School and graduated from Sacred Heart High School. She had six siblings:  brothers, Michael and Jack, and sisters, Vera, Marie, Katherine (Kitten), and Barbara.

Terry married Paul Murcko in 1949, and in the following years they had three children: daughter Nancy and sons, Paul and Mark.  The family moved in the mid-1950s to Fairfield, Connecticut. Terry was active with the McKinley School PTA (1965-72), becoming PTA President in 1970. Terry had a 20-year career in retail and was a proud member of the AFL-CIO.

Terry took great pleasure in spending time with her two grandsons, Matthew and Timothy Murcko, sons of Mark and daughter-in-law Kathy.  Terry had many interests, including knitting, sewing, and creating decoupage handbags.  She had an active, inquiring mind, and could often be found with a book in her hands, reading subjects ranging from American history to biographies to murder mysteries.

An avid Star Trek fan and convention-goer, she embraced Gene Roddenberry’s vision of a future in which humanity will have solved all of its major struggles, including hunger, war and disease, and turned to exploring the mysteries of the universe – embracing the call “to boldly go where no one has gone before.”

There will be no visitation. A funeral service will be held on Tuesday, March 26th at 11:00 a.m. at Christ the King Church of Holliston. Burial will follow the next day, March 27th at 11 am in Lawncroft Cooperative Cemetery in Fairfield, CT. In lieu of flowers, the family would appreciate donations to the St. Jude Children’s Hospital,stjude.org.