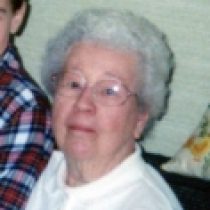 Thelma E. Pond, 101, of Holliston, passed away Thursday, January 16,
2014 at her home. Born in Ashland, she was the daughter of the late Edith (White) and Harry Pond.

Thelma was a 1934 graduate of the Normal School, which is now Framingham University. She taught at the Wilder School, and Andrew’s School; all in Holliston. She taught from 1934-1970’s. In October, Thelma became the holder of the Boston Post Cane award , an award granted to the oldest Holliston citizen.

Thelma’s family would like to thank her wonderful caregivers, hospice, and her neighborhood friends. Arrangements are private and under the care of the Chesmore Funeral Home of Holliston. www.ChesmoreFuneralHome.com Donations may be made to the Holliston High School Scholarship Foundation, Attn: Bob McGrath, 17 Hemlock Dr., Holliston, MA 01746