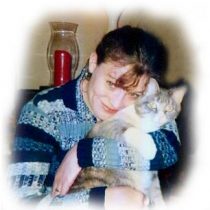 Stephanie Ann Bolduc Burke passed away unexpectedly on Sunday, July 4, 2010. Born in Middleborough, she moved from Halifax, MA to Holliston in 1984 and later made her home in Hopkinton for many years before moving to Uxbridge. Her birth father, Jeffrey S. Bolduc resides in Woolwich, Maine with his wife Donnallee. Her mother, Susan M. Waring, and step-father, Walter J. Waring of Bristol, New Hampshire resided in Holliston for many years, where Stephanie graduated from Holliston High School.

She was the dedicated mother of one son, Kevin M. Burke of Hopkinton. She also leaves behind her loving sister, Lynda Bolduc-Hicks with her husband Paul Hicks and their sons Shane and Gavin Hicks, all of Newton; her devoted aunts, Jacqueline Mott and Faith Pasternak of Halifax, MA; and uncle and aunt John L. and Stephanie Sue Mott of Oxford, IA and cousins Vicky Flynn of Sagamore Beach, MA, Keith R. Mott and Mary Mott Wilson of IA and their families. Among Stephanie’s many friends, two lifetime friends, Amy Woodworth and Reba Marie Johnson, have been as close as sisters. She is survived by her husband, Michael D. Burke of Millville; brother-in-law William Burke, sisters-in-law Maja and Kelly Schoop, and mother-in-law Deborah Conley who lives in Millville with her husband Robert Conley.

Visitation will be held at the Chesmore Funeral Home in Hopkinton Massachusetts at 57 Hayden Rowe St. on Saturday, July 10, 2010 from 1:30 to 3:00 pm with funeral service to follow at 3:00 pm. Interment will be held later in a private ceremony. In lieu of flowers, donations can be made in Kevin Burke’s name to assist in fulfilling Stephanie’s wish that her son attend college.