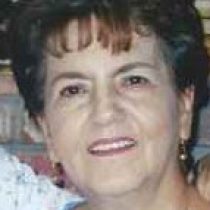 Funeral Service in New York to be announced soon

Sophia V. Dowling, 78, of Holliston, passed away Wednesday, May 2, 2018. Born in New York City, New York, she was the daughter of the late Mary (Iliakis) and George Callaizakis. She was the wife of the late James Henry Dowling Jr.

Throughout her life, Sophia believed in community. Wherever she was, she made an effort to be a part of the betterment of the place she lived. From her days as a Girl Scout leader until serving on the Holliston Council On Aging, she tried to have a positive impact.

After a long and successful career as a direct seller for Beeline Fashions, Sophia was office manager to the Drs. Burt and Clifford Toback in New Windsor, New York for close to twenty years. Among her favorite pastimes was spending time with her six grandchildren. In her later years she spent many happy days at the Holliston Senior Center, involved in helping with the yard sales, going to lunch and especially the teas. She was a big fan of our representative Carolyn Dykema, and often expressed frustration when she learned someone that she knew hadn’t gone and cast a ballot on election day.

She is survived by two children, Anastasia Dowling and husband, John Milton of Holliston, and James H. Dowling III of Brandon, FL. She also leaves behind a sister, Helen Meimaris of Fort Lee, NJ; 6 grandchildren, Erica and Alyssa Dowling, and Abigail, Stephen, Jake, and Andrew Milton. She is predeceased by her brothers, Michael, James and Gus.

Visitation will be held on Saturday, May 19th from 2:00-5:00 p.m. at the Chesmore Funeral Home of Holliston, 854 Washington St. www.ChesmoreFuneralHome.com Another visitation will take place in New York on Monday, May 21st from 11-1:00p.m. at Smith, Seaman and Quackenbush on Rt. 32 in Highland Mills, followed by a 1:30 graveside service at Cemetery of the Highlands. In lieu of flowers, please consider donations made in Sophia’s name to the Holliston Senior Center, 150 Goulding St. Holliston, MA 01746