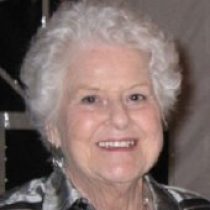 Shirley Lorraine Stets (Kinney), 82, formerly of Medfield and a longtime resident of Holliston, passed peacefully on January 10, 2015 at Wingate Skilled Nursing in Sudbury. Born in Stoughton, she was the daughter of the late Terry Kinney and Geneva Kinney (Landers).

Shirley grew up on a family farm in Stoughton and Middleboro. She was a graduate of Middleboro High School where she led the marching band as a majorette. She was also a graduate of Bristol County Business College and the Simmons School of Floral design. In the course of her career she worked as a floral designer and had her own business designing wedding bouquets. She also worked as a baker, in retail sales, in banking, childcare and as medical records administrator for doctors, hospitals and nursing homes, ending her work career in her late 70’s as a companion for the elderly.

Shirley spent two years living in a rural village of Alsace Lorraine, France with her young first born daughter and former husband. After her return, the family lived in Providence, R.I and Seekonk, Ma, before moving to Holliston. Shirley volunteered as a Brownie, Girl Scout , Cub Scout leader and CCD teacher. Shirley had many hobbies including camping, spending time at the beach, square dancing, bowling, reading, and had many creative talents such as crewel work and craft making. She sang in the folk group at St. Mary’s Church in Holliston where she developed many strong friendships. She loved weekend trips traveling throughout New England, specifically Vermont and she took several trips to Ireland with family members. She had a loving and generous heart and was always giving to others. It was her family’s privilege to know and love her and she will be deeply missed.

A celebration of life will be held on May 9, 2015 at 12 noon at The Warren Conference Center, 529 Chestnut St. Ashland, Ma. Arrangements are under the care of the Chesmore Funeral Home of Holliston.