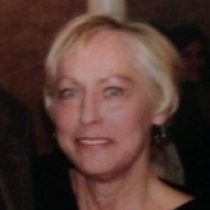 Shirley Evelyn Blair, 68, of Holliston, passed away Friday, January 8, 2016. Born in Boston, she was the daughter of the late Evelyn and Edward West. She was the wife of 47 years to Peter A. Blair of Holliston.

Shirley’s pride and joy were her family and grandchildren. She was a dedicated, kind and giving nana who was actively involved in all of their lives. Her sweet and gentle soul touched all that she met and everyone was “honey” or “sweetie” or some other endearing term.

Visitation will be held on Monday, January 11th from 5-8p.m. at the Chesmore Funeral Home of Holliston, 854 Washington St. www.ChesmoreFuneralHome.com A funeral mass will be celebrated on Tuesday, January 12th at 11:00a.m. at St. Mary’s Church of Holliston. Following the funeral, all family and friends are invited to join her immediate family at Pinecrest Golf Club, 212 Prentice St, Holliston, MA. In lieu of flowers, the family requests donations be made to her favorite charity, St. Jude Children’s Hospital, stjude.org