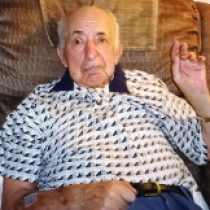 Samuel LaRosa, 88, of Framingham, died Sunday, December 14, 2008 at the
Metro West Medical Center in Framingham. Born in Newton, he was the son of
the late Gregory and Josephine (Rancourt) LaRosa. He was the husband to
Ruby Grady who passed in 1995 to whom he had been married to since 1944.

Sam was a longtime resident of Holliston and a veteran in the Army as a
Corporal during WWII.. He had also owned and operated his own business
making orthopedic braces and supports.

He is survived by 1 sister, Josephine Cheschi of Hopedale, many nieces and
nephews as well as his caretaker of many years, Alba Levinea Silva. He is
predeceased by his brothers, Francis, Leonard, Joseph and Gregory LaRosa, and sisters, Mary LaRosa, Rita Nero and Louise Waldrop.

Visitation will take place on Wednesday, December 17,2008 from 4-7p.m. at
the Chesmore Funeral Home of Holliston, 854 Washington St. (Rt. 126)
www.ChesmoreFuneralHome.com A funeral mass will take place on Thursday at
10:30a.m. at St. Mary’s Church in Holliston. Burial will follow in the
parish cemetery. In lieu of flowers, donations may be made in his memory
to the Framingham V.N.A. 209 West Central Street, Suite 313 Natick, MA
01760 or the Holliston Library, 752 Washington St. Holliston, MA. 01746