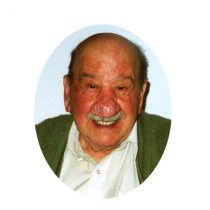 Boston-
Salvatore Alessi, 94 of Boston, died Thursday, April 23, 2009. Born in Boston, he was the son of the late Antonino and Maria (Vadala) Alessi. He was the husband of the late Phyllis (Mattson) Alessi who passed in 1996.

A lifelong Boston resident, he was a Veteran who served in the Army National Guard and the Army in WWII. He served with all 4 brothers in WWII and they all came home safely.

He is survived by his son, Anthony Alessi and his longtime girlfriend, Pat Forbes of Holliston; 4 daughters, Anne P. Murray of Uxbridge, Janet Lewis and her husband Paul of Sandown, N.H., June Bushee and her boyfriend George Harris of Dedham, and Pauline Alessi and her boyfriend, Elvin Alvarez of Quincy. He also leaves behind 9 grandchildren, 12 great-grandchildren as well as several nieces and nephews. He is predeceased by his brothers, Andrew, Charles, Joseph and Richard Alessi.

A funeral home service will be held at 12:00p.m. on Tuesday, April 28, 2009 at the Chesmore Funeral Home of Holliston, 854 Washington St. www.ChesmoreFuneralHome.com Visitation will take place prior to the service from 9am-12pm. Burial will follow at Woodlawn Cemetery in Everett, MA.