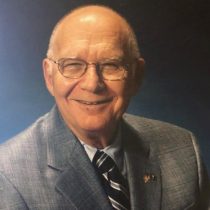 Roy E. Mathis, 79, of Holliston, MA passed away Wednesday, December 26, 2018 after a courageous battle with Parkinson’s disease. Roy was the loving husband of 57 years to Zebbie Mathis, his high school sweetheart and love of his life.

Roy’s deepest loves were his wife, his family, and his country.  Born and raised in Miami, Roy was a 1957 graduate of Miami Jackson High School, and earned a Public Administration degree from Florida State University in 1961. He was a distinguished graduate of the Florida State University ROTC program, upon which he was commissioned to the United States Air Force. Roy served as an active reservist until his eventual retirement as a Lt. Colonel in 1985. A dedicated student, he was listed in the “Who’s Who among Students in American Universities and Colleges” in 1960, and was eventually inducted into the FSU Student Hall of Fame. Professionally, Roy built a successful 30 year career as a Sales Executive with Kraft Foods, which coupled with his time in the Air Force afforded him and Zebbie the “opportunity” to move 14 times. Roy was passionate and committed to his patriotism, his faith, and his family. He enjoyed cooking, gardening, volunteering, grand-parenting, reading anything about history, and watching his beloved FSU Seminoles.

Besides his wife, Roy was the dedicated father of Tanya Mathis of Dedham, Melanie Geary and her husband, Dan of Holliston, and Darren Mathis and his wife, Naomi of Acton.  He is survived by 7 grandchildren, Connor Dempsey of Dedham; Brendon & Lauren Geary of Holliston; Maya, Sadie, Ruby and Chase Mathis, of Acton. In addition, he leaves his sister, Mary Bennett of Middleburg, Florida.

Visitation will be held on Thursday, January 3rd from 4-7 pm at Chesmore Funeral Home of Holliston, 854 Washington St.  A service and celebration of Roy’s life will be held on Friday, January 4th at 10:00 a.m. at The First Congregational Church, 725 Washington St, Holliston. His burial will be at a later date at the Massachusetts National Cemetery in Bourne, MA.  In lieu of flowers, memorial donations may be made to the American Parkinson Disease Association 135 Parkinson Ave, Staten Island NY 10305.  WWW.apdaparkinson.org.