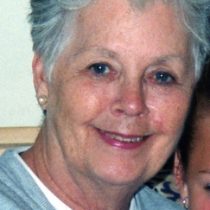 South Dennis,MA-
Rose Marie (Thomas) Ferdenzi, 83, of South Dennis, MA formerly of Holliston, MA died peacefully April 12, 2011. She was the beloved wife of Edward J. Ferdenzi to whom she was married for 51 years. The daughter of the late John and Evelyn (Ross) Thomas, she was born along with her twin sister on June 23, 1927.

She was raised and educated in Newton, MA and graduated from Newton High School and Fisher Secretarial School in Boston, MA. As a young woman, Mrs. Ferdenzi, was employed as a secretary for Boston area doctors and in her free time sang with the USO, entertaining the troops during WWII. While raising her family, she was employed part-time in retail.
“Rose” will be most remembered as a devoted mother and grandmother, as well as, the true matriarch of her family.

Visitation will be held on Friday, April 15, 2011 from 4-8p.m. at the Chesmore Funeral Home of Holliston, 854 Washington St. www.ChesmoreFuneralHome.com Her funeral Mass will take place on Saturday, at 9:00 AM at St. Mary’s Church of Holliston. (Rte. 16), Burial will follow at Wildwood Cemetery in Ashland. In lieu of flowers, donations may be made to Eagle Pond Living Center/Alzheimer’s Unit, 1 Love Lane, South Dennis, MA 02660