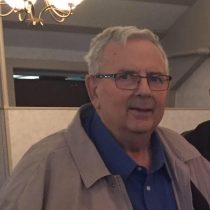 Robert Wayne Fairbanks, 79, of Hopkinton, passed away September 12, 2016 at the Metrowest Medical Center in Framingham. Born in Canton, he was the son of the late Madeline (Martin) and Alfred Fairbanks. He was the husband of 54 years to Sandra (Johnson) Fairbanks of Hopkinton.

Bob was retired from Art’s Auto Body in Hopkinton after 50 years. He was a CCD teacher as well as a marriage minister at St. John’s Church in Hopkinton and coached Little League for over 25 years. Bob enjoyed playing golf, vacationing in Maine during the summers and was an avid Boston sports fan. His grandchildren were his life.

Besides his wife, he is survived by his son, Richard Fairbanks and his wife Jennifer of Hopkinton; his daughter, Susan Murphy and her husband James of Framingham; his brother, Arthur W. (Art) Fairbanks and his wife Anne of Hopkinton; 2 sisters, Madeline Ledin of Rockland and Sally Roche and her husband Raymond of Uxbridge. He also leaves behind 6 grandchildren, Cameron, MacKenzie, Kyle and Luke Fairbanks, and Ryan, Tara Murphy; as well as numerous nieces, nephews and in-laws and his beloved dog, Molly. He is predeceased by his son, R. Michael Fairbanks who passed away in 1986.

Visitation will be held on Thursday, September 15th from 4-7p.m. at the Chesmore Funeral Home of Hopkinton, 57 Hayden Rowe St. www.ChesmoreFuneralHome.com A funeral mass will be celebrated on Friday, September 16th at 10:30a.m. at St. John the Evangelist Church in Hopkinton. Burial will follow in Evergreen Cemetery in Hopkinton. In lieu of flowers, donations may be made to The Jimmy Fund, P.O. Box 849168 Boston, MA 02284 or Jimmyfund.org, in remembrance of R. Michael Fairbanks.