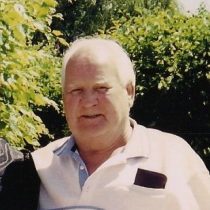 Robert R. Rooney, 82, of Holliston, passed away peacefully Saturday, April 9, 2011 at the Metrowest Medical Center in Natick. Born in Wellesley, he was the son of the late Joseph and Anna (Cameron) Rooney. He was the husband of the late Jean (McHeffey) Rooney who passed in 2003.

A longtime resident of Holliston, Robert grew up in Wellesley and attended Wellesley Schools. He served in the Army during the Korean Conflict and was the owner of Holliston Cleaners which he established in 1956. He was very active for many years in the Lions Club in Holliston and an avid Boston sports fan. In his later years, his greatest source of pleasure came from his 3 grandchildren and their many accomplishments and he loved a rousing game of pitch shared with his card playing buddies.

He is survived by his sons, Paul Robert Rooney of Swansea, Brian Joseph Rooney of Bellingham, a daughter, Leslie Anne Germond of Holden and his siblings, Geraldine Silvestro of Hopkinton, and Elisabeth Ann Jacobs of New Mexico. He also leaves behind 3 grandchildren, Erin Rooney, Jennifer Rooney and Cameron Germond. He is predeceased by 1 brother, Joseph Rooney Jr. and 2 sisters, Catherine “Lorraine” Bennett and Myrtle “Mickey” Hankins.

Visitation will be held on Thursday, April 14, 2011 from 5-8 pm at the Chesmore Funeral Home of Holliston, 854 Washington St. www.ChesmoreFuneralHome.com. A mass will take place on Friday at 10:30 am in St. Mary’s Church of Holliston. Burial will follow at Lake Grove Cemetery in Holliston. In lieu of flowers, donations in his memory may be made to Metrowest Home Care, 85 Lincoln St. Framingham, MA. 01702